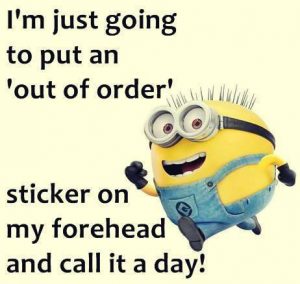 Every morning in our ranching and farming community the men would regularly meet at the local restaurant. Enjoying coffee, breakfast and keep up with the area happenings of the day. Topics included: cows, crops, politics and solving all the world’s problems for the day. At 6:00 am–8:30 am it was the men’s den!

On my husband’s birthday, October 7th a few years back, I surprised him with a singing telegram at the restaurant so all his friends would enjoy his birthday too. I took the cake to the restaurant the night before so when they sang Happy Birthday the cake made its appearance. I thought it would make a memorable party for my husband and his friends 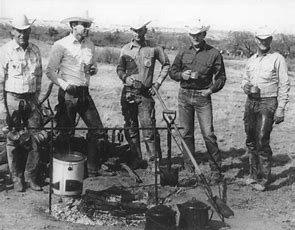 When I booked the singing telegram, I chose the dancing Gorilla in a hula skirt to show up at the coffee shop at 6:30 am for the biggest effect. I was excited about the next day’s surprise. However, the night before, the woman from Party Singing Grams called and said she was sorry but they were double booked and can’t come.

I was so disappointed, all the plans seemed to fall apart at that moment. She then suggested I should wear the gorilla suit with the hula outfit.  And dance to the taped Hawaiian music and birthday song she recorded, if I would come and get it the suit.

After my husband left for work at 6:00 I hurriedly put the outfit on. My daughter drove me downtown, and I stood outside the window trying to get my brave on. Finally, I ran in, messed up my husband’s hair, took a pose with my arms out and pressed the button to start the music on the tape-recorder. To my shock “Creedence Clearwater Revival” blasted out a rock-and-roll tune–she had sent the wrong tape! Stunned, my mind raced at what to do next, so I tried and make the Hula work.

I started the music again and did the two steps left waving my arms and two steps right still waving my arms only at a much more increased speed. I thought the tape would never end, and I was sweating, that was hard work in a gorilla outfit!

Finally, the happy birthday song ended, and I ran out the door, giving the proper birthday wishes and left. I raced home, packed the gorilla outfit up and waited for him to come home; all the while trying to pretend nothing unusual happened. The hardest part was for my daughter and me to keep a straight face when he came home. He described to us about what happened to him at the coffee shop. How some woman dressed as a hula dancing gorilla tried to do the hula dance to a “Creedence Clearwater Revival’s” rock-and-roll song, strange.

But the cake was great. He also added that he thought the Party Singing Gram lady had put on some weight because she was much heavier than she used to be! He also noted, her hair was blonde now, she must have dyed it because he saw blonde hair at the back of the gorilla’s neck!!!

I took two years to confess that the gorilla was me, but when I think of the fun, I had it still gives me the giggles. Thank you, God, for giving us a sense of humor, where would we be without it? ©

Our mouths were filled with laughter,
our tongues with songs of joy.
Then it was said among the nations,
“The Lord has done great things for them.”

Thank you for sharing your time with me today, dear friend.

If you find and inspiration, love or laughter here, please share with the ones who might enjoy a giggle too.

Have a Great week, HUGS

5 comments on “The Coffee Party”