I Don’t Want To Complain, But…

I Don’t Want To Complain, But… 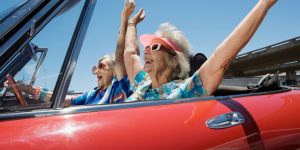 Two elderly women were out driving in a large car – both could barely see over the dashboard. As they were cruising along, they came to an intersection.

The stoplight was red, but they just went on through. The woman in the passenger seat thought to herself “I must be losing it.  I could have sworn we just went through a red light.” After a few more

After a few more minutes, they came to another intersection and the light was red again. Again, they went right through. The woman in the passenger seat was almost sure that the light had been red but was really concerned that she was losing it. She was getting nervous.

At the next intersection, sure enough, the light was red and they went on through. So, she turned to the other woman and said, “Mildred, did you know that we just ran through three red lights in a row? You could have killed us both!” Mildred turned

Mildred turned to her and said, “Oh, crap, am I driving?” Author unknown 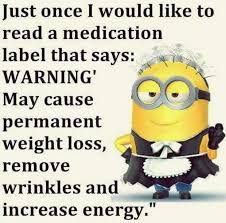 With my clothes piling up and wearing my last pair of pants I needed to look for a new washer and dryer.  I searched furniture stores for the perfect laundry set that would fit both our needs and budget.  After comparing prices, we made were our decision.  I liked the plain white set with burgundy lettering, (I thought it would match our other furniture) I know it’s not going in the living room) besides, it had a wrinkle free cycle which appealed to me.The salesman was anxious and jumpy and talked incisively.  He assured me I had come to the right place, gotten the best price, best deal and best warranty of any other customer he had had that day. 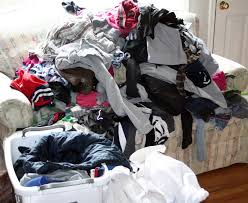 They were going to deliver the washer and dryer on Saturday morning around 9:00 am. Saturday morning came and no washer and dryer. I started panic we needed to wash some clothes and be at another appointment across town at 2:00 pm.  Finally, I received a call telling me they were running late and would be there at 1:00 pm.I knew this would be cutting my time short, mentally figuring out how I was going to make my next appointment, take a shower and have clean clothes. At this point, I was in extreme meltdown mode.

At 1:10 pm the crew showed up and let me know they didn’t have time to set everything up. “It was easy, you could do it all by yourself,” Jr. said, giving me the thumbs up as he raced out the door. Now I don’t know about you, but when someone tells me it’s easy, red flags start flying. Now, Jr. had no way of knowing that I am mechanically delayed and seemed to have confidence in my ability to swing a wrench. Lol, I remember thinking that the washer and dryer looked different than I had remembered. However, I didn’t have time to spend on that thought as we rushed to our next appointment

After a stressful afternoon, arriving home and looking at the washer and dryer, I realized the top of my new set was the wrong color. Instead of white with burgundy letters across the top, it was baby blue enamel 50’s look. I checked serial numbers, did research on the internet, and could not find anything to match.  I was sure that the company had ripped me off and sent me a relic from the back of the warehouse.  I finally fell asleep at 4:00 am worn out and upset.  And I still had no clothes washed!!!

Off to church, we went, but I must tell you I was not in a church going frame of mind.  Later I decided to go to the furniture store and have a chat with the salesman.  Praying I would be kind but firm, I walked in and asked for Harold.   All the while explaining to another salesperson about my predicament. He wasn’t at all sympatric telling me those things often happen. (I was not feeling cared for at that moment.)

Here comes Harold, and I explained my difficulty.  He told me he had never seen a washer and dryer with Baby blue on it.  He even suggested that I might have been lucky and received a newer model.   We walked through the warehouse, and there was nothing like it on the store computer either.

He was beginning to sweat, talking a mile a minute, I thought I needed to take matters into my own hands.  I was firm and told Harold that I wanted the company to come a get the baby blue laundry set, and I would cancel my order, and buy it somewhere else.  Harold wanted to discuss the matter further and asked me to sit down.

All of a sudden he sat up straight in his chair as if a bright idea just hit him.  He said,” did you remove the blue plastic from your washer and dryer? Shocked I squared my shoulder, and indigently said I felt the top and it was enamel. Harold told me sometimes the plastic is hard to remove.  My mind was racing, and I let him know I would go right home and check, but I was positive it was enamel.

Hurrying into the house, I grabbed a coin and scratched at the enamel, and it started to peel off.  Wow, am I embarrassed!  As I peeled off the baby blue plastic, there was my beautiful white Laundry set, with burgundy letters.  I tried to call poor Harold back, but he wasn’t accepting calls, I wonder why?

Do you ever make embarrassing mistakes and beat yourself up for the foolish error, I often do. I have had to confess my folly many times. In  Psalm 86:15 it says: “God is compassionate, gracious, and slow to anger, abounding in love and faithfulness.” I love that God always hears my prayers and loves me, no matter my circumstances. ©

Thank you, dear friends, for spending your time with me. Have a wonderful weekend. HUGS,
Lovingly, Karan